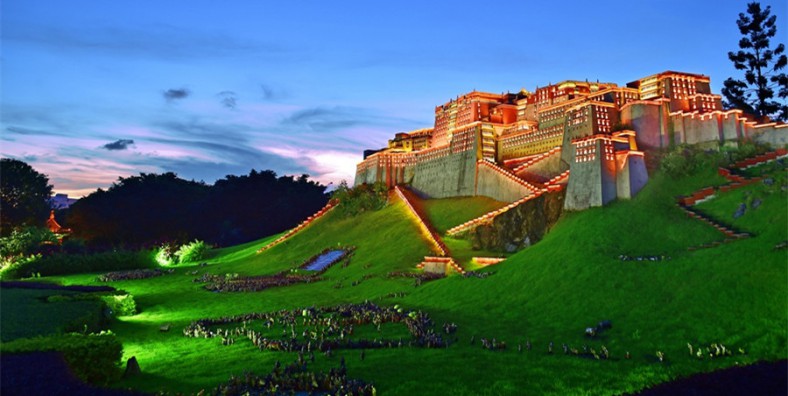 Through the performance of ethnic customs, the display of folk handicrafts, and the regular holding of large-scale folk festivals, the authentic, rich and colorful folk customs and cultures of all ethnic groups in China are displayed from various angles and in various aspects.

Why is China Folk Culture Village So Special?

Splendid China Folk Culture Village in Shenzhen is a comprehensive miniature park reflecting the history, culture, art, ancient architecture, and customs and habits of various nationalities in China. It is one of the world largest scenery parks in the amount of scenarios reproduced.

Where is China Folk Culture Village

It is located at Shenzhen bay, the tourist area of Shenzhen overseas Chinese town. From Luohu subway station (Shenzhen subway line 1), take the train for 35-40 minutes, or take the bus for 30 minutes.

Main Attractions to See Near to China Folk Culture Village

According to the map of China, more than 100 major tourist attractions have been reduced and laid out. Most scenic spots have been reduced to 1:15. It is divided into scenic spots and comprehensive service areas. The whole park covers an area of 30 hectares. Cars and trains transport tourists around the park, making it possible to visit the Great Wall, Forbidden City, Temple of Heaven, Three Gorges Dam, Potala Palace and Terracotta Warriors in one day.

The park also held several exhibitions showing Chinese history and culture. Some programs are only performed on weekends.

If you want to have a thorough understanding of China’s major scenic spots, splendid china district should be your choice. Apart from history and scenic spots, you can also find many houses here, where there are folk celebrations and singing and dancing performances. There is also a commercial area near the gate of the theme park, which follows the antique style and has traditional handicraft and snack workshops.

Besides the largest Han nationality, there are 55 ethnic minorities in China, which are distributed in many parts of the country. There, you can not only see the houses of ethnic minorities, but also take part in their interesting festivals. Among them, the most distinctive festivals are introduced as follows:

No matter which village you go to, young boys and girls will warmly welcome you. If you come at the right time, you will be able to attend their unique festivals, such as Dai Water Splashing Festival, Yi Fireworks Festival and Lisu Knife Bar Festival.

Dynasty is at War: It is a spectacular equestrian show with more than 300 equestrian stunt actors reproducing the battle scene of the late Ming Dynasty (1368 – 1644).

Note: Opeing time is half an hour earlier during weekends and holidays.