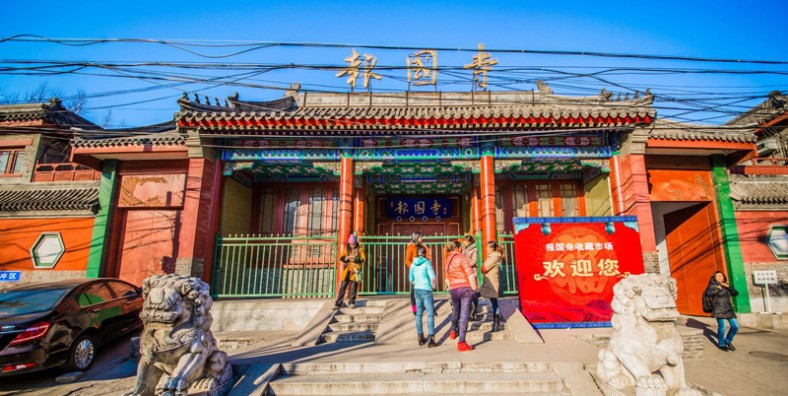 Why is Baoguo Temple Temple so special?

The Baoguo Temple is located at No.1, Baoguo Temple Front Street, Xicheng District, Beijing. It is located in the ruins park of the Ming City Wall in the downtown area of Beijing. Built in the Liao Dynasty, but on a small scale, it is known as the Xiaobaoguo Temple. The temple faces south and the main buildings are all built on a north-south central axis. With the rise of Liulichang Book Market, the Baoguo Temple Book Market gradually declined. Today, the Baoguo temple has inherited hundreds of years of culture and has become a cultural square in the book market, which is indeed an act of prosperity.

The Baoguo Temple was founded in Liao Dynasty, but it is very small in scale and is known as the Xiaobaoguo Temple. At the beginning of the Ming Dynasty, it collapsed. It was rebuilt in 1466 and renamed Ciren Temple, commonly known as Baoguo Temple. During the reign of Chenghua of the Ming Dynasty (1465-1487), Zhou Jixiang, the younger brother of the Empress Dowager Zhou, who saw through the world of mortals, was determined to become a monk. The money and food from the royal treasury were allocated to the old foundation of Xiaobaoguo Temple and expanded into Ciren Temple, where Zhou Jixiang became the abbot.

In 1679 AD, the capital was hit by an earthquake, and most of the buildings in the Baoguo Temple collapsed. In the 19th year of Qing Ganlong, it was rebuilt in 1754 AD and renamed as “Great Patriotic Ciren Temple”.

The temple faces south on the whole, and the buildings in the temple are built on a north-south central axis. It originally had six rows of houses, but now there are only four rows left. Entering the temple, you will see two stone lions standing in front of the first row, with the two stone slabs on the east and west. In the second row, at the entrance of the hall is a heavenly king’s palace and two stone tablets. In addition, side halls are built on the east and west sides. The roof of the hall in the third row is mainly grey tiles, with green glazed tiles on the edge. There is a brick platform in front of the hall. There is a back hall in the last row and side halls on both sides. In addition, there are some ancient steles at the back of the temple, for example, steles commemorating the completion of the temple in Ming Dynasty (1368-1644) and poems commemorating the reconstruction of the temple in Qing Dynasty (1636-1912).

In the late Ming and early Qing dynasties, baoguo temple was the most famous book market in Beijing, many years before Liulichang book market. This was once a place of elegant travel for scholars and scholars at that time, leaving behind many legendary stories.

In recent years, Guobao Temple has become a famous antique collector market in Beijing. Every year, several national collectors fairs are held there, so the temple attracts collectors and businessmen from all over the country. However, with the reconstruction of Beijing’s old city, the collector market has shifted to the temple hall, making the temple an antique exhibition hall. The exhibition is also on sale, mainly including Chinese and foreign ancient coins, old Chinese books, newspapers, all kinds of old tickets, cartoons and playing cards. In these shops, there are other antiques for sale, such as bracelets, works, stamps, jade and so on. If you are an antique lover, Guobao Temple is the place you must go. This temple is not only a collector’s market, but also a good place for all antique collectors to exchange entertainment. Remember to bargain very carefully because there are fake antiques.、

The imperial monument of 1466 and the poem monument of baoguo temple rebuilt in 1756 are still preserved in the temple. For the national key protection of cultural relics.

Fayuan Temple :It is not only an ancient temple with a long history in Beijing, but also the location of China Buddhist Academy and China Buddhist Library and Heritage Museum. It is an important place for training young monks and studying Buddhist culture.