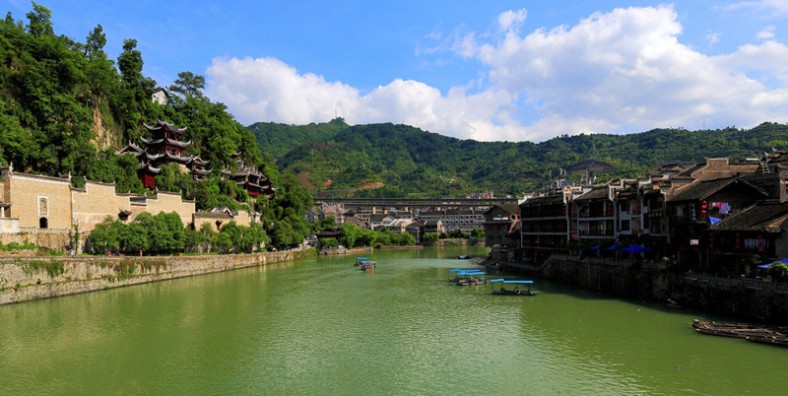 There are a large number of ancient buildings, traditional houses and historical docks inside and outside the city. Zhenyuan ancient town enjoys convenient transportation and superior location.

Why is Zhenyuan Ancient Town So Special?

The long history endows Zhenyuan ancient town with many colorful cultural relics, making it more like a historical garden. The town covers only 3.1 square kilometers (about 1.2 square miles), but with its unique architecture, exquisite prints and wonderful natural landscape, you are greeted by more than 160 scenic spots, including caves, palaces, pavilions, temples and rivers. Among them are the famous Wuyang River Scenic Area and the elegant ancient buildings in the Black Dragon Cave (Qinglong Cave)-attractions that attract tourists in eastern Guizhou.

Where is Zhenyuan Ancient Town

The ancient town of Zhenyuan covers only 3.1 square kilometers. It is located on an eastern part of guizhou province.

From the Xia Dynasty to the Shang Dynasty, there have been people living here.

In November of the 6th year of song baoyou’s reign (1258 a.d.), Huang ping city was built and named Zhenyuan state, which was the beginning of Zhenyuan’s name.

In 1986, it was listed as a national historical and cultural city by the State Council.

This ancient city with a long history of more than 2,000 years is located at the main entrance to Guizhou. It is rich in tourism resources, numerous cultural relics and charming natural scenery.

Black Dragon Cave is actually an ancient temple complex on Zhonghe Mountain east of Zhenyuan ancient town, and is the center of all historic sites in Zhenyuan. Black Dragon Cave Temple includes single-storey and multi-storey pavilions, temples, shrines, palaces, etc. After several wars, the Black Dragon Cave was built in the Ming Dynasty (1368-1644). Its present shape is the result of several renovations.
There are many independent buildings in Heilongdong, including Zhu Sheng Bridge, Zhongyuan Temple, Ziyang Academy, Huang Yuge, Wanshou Palace and Lu Xiangyan. In the ancient buildings in Zhenyuan, although Heilongdong is close to Zhenyuan ancient town, it retains its natural flavor.

In 1988, the Black Dragon Cave was listed as a key cultural relic under state protection.

Tips: You may as well take pictures outside the gate of the the Black Dragon Cave as you will not see the scenery as dramatically once you are amongst the buildings.

Wuyang River Scenic Area is famous for its beautiful scenery, historical relics and strong ethnic customs. It covers 625 square kilometers (241 square miles). Whether you walk along Wuyang River or cruise on Wuyang River, you will be pleasantly surprised. Strange canyons, precipitous peaks and crystal-like sea water appear in front of you as if you were entering a fairyland.

Wuyang Three Gorges is a 35-kilometer-long waterway and is the most beautiful part of the whole scenic area. As Buddhists used to prefer to stay here to cultivate their morality, it has become an ancient Buddhist resort in Guizhou Province.