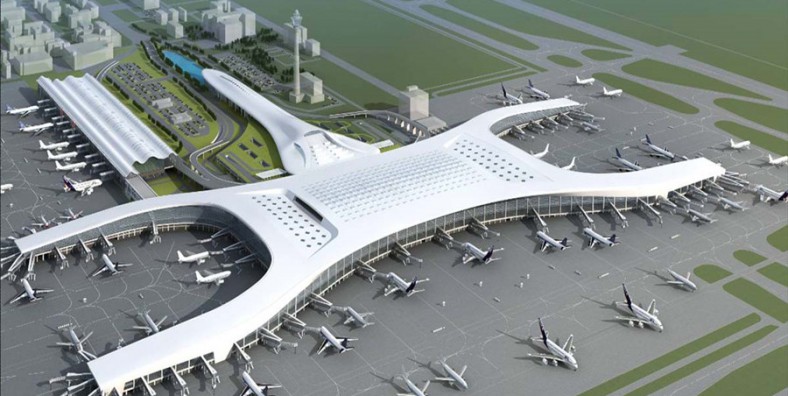 The airport is located in Xinzheng, 37 kilometres (23 mi) southeast of downtown Zhengzhou. It was opened on 28 August 1997, replacing its predecessor, the now-demolished Dongjiao Airport. The airport is the only international airport in Henan and serves as a main gateway for the province and the central plain area.

In 2000, the airport was approved by the state council to become the 21st international airport in China.

In 2013, the state council approved the expansion project of the airport, including a new terminal (Terminal 2), the second runway (Runway 12L/30R) and a ground traffic center (GTC), in alignment with its first airport-based economy zone (Zhengzhou Airport Economy Zone).[8] The construction started in 2012, and was finished in 2015. Terminal 2 was opened on 19 December 2015 together with the GTC, and the second runway was opened on 7 January 2016,[9] making the airport the first with two terminals and two runways in central China.

After Foxconn Zhengzhou (the main production base for iPhone, located just to the north of the airport) was put into operation in 2010, the cargo transport of the airport has been booming. Between 2010 and 2017, the cargo volume handled by the airport increased from 85,798.1[10] to 502,714.8[2] metric tonnes, growing by 34 percent yearly on average, making it the 7th busiest airport in China by cargo traffic.[3]

Long-haul and intercontinental passenger services from the airport also began to emerge in recent years. In late 2015 Emirates announced it would begin service from Dubai to Zhengzhou via Yinchuan from May 2016, as part of the airline’s expansion plans in China. This is Zhengzhou’s first connection to the Middle East.[11] The service started from 3 May 2016[12] and stopped from November 2018. On 11 November 2016, Sichuan Airlines launched non-stop flights to Vancouver. It is the first regular non-stop intercontinental passenger service for the airport.[13][14] Non-stop flight service to Melbourne was opened by Jetstar on 6 December 2017.[15] This is the first air route to Australia from the airport.

The airport rail link services between Zhengzhou city center and the airport became available after the completion of the ground traffic center in 2015, including the Zhengzhou–Xinzheng Airport intercity railway, which started operations from 31 December 2015 and served as an express link,[16] and Zhengzhou Metro Chengjiao line, which started operations from 12 January 2017.[17]

After the opening of Terminal 2, it was closed as a future reserve and temporarily transformed into an exhibition hall.[19]

Terminal 2, the only terminal building in operation at present, is located to the northeast of Terminal 1. It was opened on 19 December 2015 with an area of 485,000 square metres (5,220,000 sq ft). Terminal 2 has an X-shaped layout with four piers seeing from above, which resembles and implies “opened arms to embrace the world”.[20] The northwest pier is for international flights and others are for domestic use.

The ground traffic center was opened together with Terminal 2. It is to the west of Terminal 2 and is connected to the arrival hall of Terminal 2 by three corridors. The GTC has been designed to become a transportation hub for traffic between the airport and cities in central plains region, with an intercity train station and a metro station on the underground floors. Passengers can take taxis, intercity coaches, intercity trains and Zhengzhou Metro trains here.

The new air-traffic control tower was put into use on 7 January 2016, together with the second runway.[21] The control tower is 93.5 m (307 ft) in height and its shape resembles the Jiahu Gudi (bone flute) discovered in Henan.

The airport has two parallel runways:

Both expressways are connected to the airport via Yingbin Elevated Road.

The Xinzheng Airport railway station is located in the GTC. The waiting hall and ticket offices are on the B2 floor and platforms are on the B3 floor. Intercity trains to Zhengzhou, Zhengzhou East, Jiaozuo and Songchenglu (Kaifeng) are in operation.

Trains of the Chengjiao Line of the Zhengzhou Metro connects the airport to downtown Zhengzhou using through services via Line 2.

There are several airport shuttle bus routes to various destinations in Zhengzhou. The bus station is on the 1st floor of Terminal 2.

The airport also offers inter-city coach services to and from other cities in the central plain region, including Luoyang, Kaifeng, Xuchang, Xinxiang, Nanyang, Anyang, Jiaozuo, Pingdingshan, Shangqiu, Zhoukou, Zhumadian, Heze, Changzhi, and Jincheng. Unlike the Zhengzhou routes, inter-city coaches depart from the GTC.

There are several bus routes, operated by Zhengzhou Bus Communication Corporation, serving the airport and neighbouring areas in the Zhengzhou Airport Economy Zone.