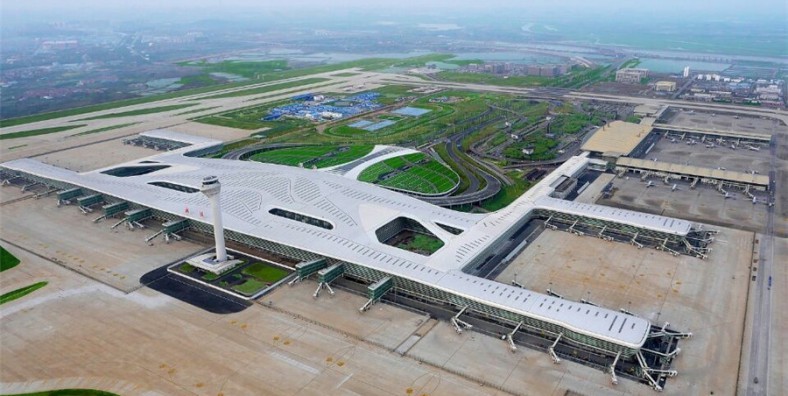 Wuhan Tianhe International Airport (IATA: WUH, ICAO: ZHHH) serves Wuhan, the capital of the Hubei province, People’s Republic of China. It was opened on 15 April 1995 substituting the old Hankou Wangjiadun Airport and Nanhu Airport as the major airport of Wuhan.[1][2] The airport is located in Wuhan’s suburban Huangpi District, around 26 km (16 mi) to the north of Wuhan city center. It is the busiest airport of central China as it is geographically located in the centre of China’s airline route network. The airport is a focus city for Air China, China Eastern Airlines and China Southern Airlines. The airport has flights to international destinations such as New York City, San Francisco, London, Tokyo, Rome, Istanbul, Dubai, Paris, Sydney, Bangkok, Moscow, Osaka, Seoul, and Singapore.

The airport served 20,772,000 passengers in 2016, making it the 14th busiest airport by passenger traffic in China. The name Tianhe (天河) can be literally translated as “Sky River”; it is also one of the names for the Milky Way in ancient Chinese.[3]

Since January 1, 2019, passengers from 53 countries such as EU countries, Japan, Korea, Russia, the U.S., when traveling to a third country, can enter China from this airport without a Chinese visa for up to 144 hours.

To replace the old Wangjiadun Airport, Chinese government permitted the plan to build a commercial airport in Tianhe Town, Huangpi District, Wuhan at July 1, 1985. The first term construction started in December 1989 and finished in April 1994. It first operated domestic flights but later in 2000, the CAA set it as an international airport.

The airport expanded twice—first for terminal 2 and second for terminal 3, new control tower and the second runway.

Wuhan opened up to intercontinental flights when Air France began service from Paris on 11 April 2012, [6] and two years later opened up to the United States non-stop when China Southern Airlines announced, in September 2014, a daily non-stop flight to San Francisco, originating from Guangzhou, operating with a Boeing 787 to begin December 16, 2014.[7]

Terminal 1 was opened in 1995 when all flight services are transferred from Nanhu Airport to Tianhe International Airport. It was located at where the west concourse of Terminal 3 stands nowadays. It had been the only terminal of the airport until Terminal 2 was completed in 2008.

Terminal 2 was closed when Terminal 3 were officially opened in mid 2017 for the upgrade construction. [10]

The single-floor terminal is located at the southwest of Terminal 2. It has a floor area of 5310 square meters, shared by both departure and arrival facilities. To handle wide-body jet within limited ramp, there is no air-bridge for this terminal.[11]

Due to its compact size and the growing number of international flights, there were complaints that Terminal 1 was “too crowded”. In 2013, the average departure traffic was 880 per hour during the peak season, which was far greater than its designed maximum capacity of 550.[12]

The International Terminal was closed in mid 2017 and it will be turned to a chartered and VIP terminal in the future.

Starting from August 31, 2017, all flights from the original International Terminal (international, Hong Kong, Macau and Taiwan) and T2 (domestic) have been moved to Terminal 3, which has a passenger capacity of 35 million. Following the opening of the new Terminal 3, T1 and T2 were closed temporarily for renovation. T1 is scheduled to operate as the VIP terminal. T2 will undergo renovation and reopen when passengers in T3 exceed the design limit.[13]

The T3 has a new departure lounge, restaurants and duty-free shops.

The construction of Terminal 3 started in June 2013 and it was opened on August 31, 2017. A new runway, new control tower, and a transportation hub connecting the airport to the city with an intercity railway and a metro line have been built and opened along with the new terminal.

There is a limited bus service between Wuhan Tianhe Airport and several bus stops in the urban area of Wuhan.[37]

The Wuhan–Xiaogan Intercity Railway, one of the lines of the Wuhan Metropolitan Area intercity railway, serves Wuhan Tianhe Airport. This railway opened in December 2016.[38]

Presently, Tianhe is the only civic airport in the Wuhan metropolitan area. However, the city authorities are considering repurposing the military Shanpo Airfield (山坡机场; 30°05′17″N 114°18′52″E), located in the city’s far southern suburbs (Shanpo Township, Jiangxia District), as a commercial cargo airport. If the plans are implemented, Shanpo will become Wuhan’s second airport.[40]