An overview of The three pagodas

Where is it located?

Three Pagoda of Chongsheng Temple is located 1.5 kilometers northwest of Dali Old Town. It is situated at the east foot of Yingle Peak of the massive Cangshan Mountain and faced the west shore of Erhai Lake of ancient Dali. There are two rivers flowing through, one is Tao Stream in the east and Mei Stream in the north.

Distance from other Famous Attractions in Dali 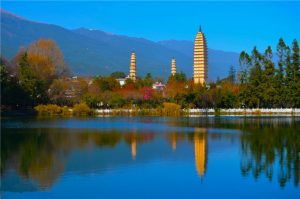 The other two sibling pagodas, at 42.19 meters high, stand to the northwest and southwest of Qianxun Pagoda and they are octagonal with ten multi-eave pent roofs. From their structure and shape, the two small pagodas should be built in the Dali Kingdom of the Song Dynasty style. 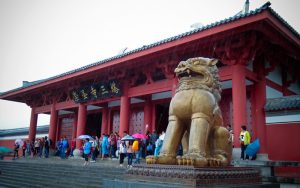 Chongsheng Temple complex is located behind the Three Pagodas which was the royal temple of Dali and one of t6he largest Buddhist centers in Southeast Asia. There are many sites to explore in front of Chongsheng Monastery and in the monastery.Walk behind Three Pagodas you’ll reach Dapeng Golden Wing Bird Square and see the Golden Wing Bird and explore the biggest bell in Yunnan – Nanzhao Jianji Bell which was built in 871 AD. Entering into the temple, you’ll pass many Buddhist prayer halls, like Daxiongbao Hall, Medicine Hall, Caishen Hall, Maitreya Hall, Arhat Hall, Prayer Wheel, Thousan Buddha Hall, the Hall of Patriarch and finally reach Wanghai Tower where all the temple complex, the Three Pagodas, Cangshan Mountain and Erhai Lake can be seen.

Travelers can feel free to use our private car taking to Three Pagodas in Dali. If you are independent travelers, you can take bus or go by walking. 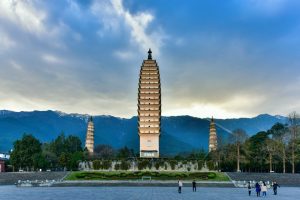