Built during the Tang and Song Dynasties, Shibao Mountain, also known as Shanbao Mountain, is  the southern branch of Laojun Mountain ranges. Here “The Stone’s in Blossom” (the name of Shibao means ‘Stone Treasure’ in Chinese) matches very well with the natural landscape of red sandstone turtle – back stones from created by a century of rainwater. One could imagine some stone figures to be a stone lion, a flower or a bell. Besides, the Danxia landscape is the most picturesque view of all, and it keeps developing continuously. Shibao Mountain is located in the midst of a picturesque landscape, with a broad view consisting of row upon row of mountain peaks, tranquil valleys, dense green forest, clear springs, and deep-buried ancient temple houses created by skilled Bai workers and talented artisans.

Why is Shibao Mountain so special?

It is one of the 44 key scenic spots of the first batch the State Council released, and is an important part of Dali Scenic Area. Shibao Mountain is Danxia landform mountain. The globular weathered granites formed picturesque peaks and rocks looks like bell, arrow, lions, elephants, which are very unique. It is famous for the diverse grottoes and cliff sculptures, entitled as the “Southwest Dunhuang”.

Where is Shibao Mountain?

How to Get to Shibao Mountain?

Shibao Mountain enjoys the long and profound history and diverse history sites.Temples and monasteries were built in Tang, Song, Yuan, Ming and Qing dynasties. Baoxiang Temple has a history of over 800 years. Shizhong Mountain Grottoes enjoys the history of 1100 years, offering the materials for studying on Nanzhao Kingdom and Dali Kingdom. It has high value in terms of historical relic and sculptural art. 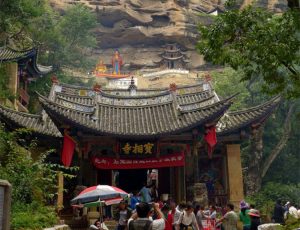 With the title of ‘Yunnan hanging Temple’, was constructed in the Yuan dynasty (around 1291 A.D.). This cluster is made up of the Baoxiang Temple, the Tongming Pavilion, Linqun’an and the Jingding Temple. For a long time, the eight scenic spots in Baoxiang Temple touched the hearts of many literary people, who sang its praises. The landscape here is some of the most beautiful in the entire scenic area. It attracts flocks of wild monkeys that have taken up residence there. “Playing with the monkeys” in Baoxiang Temple can be one of the most interesting and fun activities in your tour.

Haiyunju is regarded as a very tranquil place resting at the entrance of the mountain gate. It was constructed at the end of Ming dynasty (around 1684 A.D.) the temple is hidden in the dense pine trees, and the old cypress trees kiss the sky. Some monks’ cemetery pagodas stand solemnly against the white wall of the temple. It’s the best place to spend your leisure time. The clusters were divided into two courtyards and three departments, but linked with each other tightly. Those made the building look simple but tidy and strong. It’s full of examples of the ancient Bai craftsmen’s high level of skill and talent.

From the old time to now, Shibao Mountain has attracted many visitors, including the Great Chinese Travelers, Xuxiake of the Ming dynasty, the famous scholars, Yang shen’san and Li yuanyang, and also the high ranking monks Dandang and Dachu. In order to show their admiration for the famous Nountain, some of them wrote down the beautiful poems to praise Shibaoshan Mountain, which added luster to its fame. 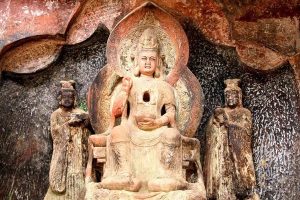 Shibao Mountain is well known not only for its breathtaking landscape, but also for its marvelous grottoes. The Shizhongshan Grottoes, known as ‘the gem of the south in Yunnan’, were created by the ancient Bai People in the historical period of the Tang and Song dynasties. So far, a total of 16 caves and 139 sculptural images have been found.There are works made in both the Nanzhao Dynasty and in the Kingdom of Dali. A wide range of subject matters are featured in the Shizhongshan Grottoes, including Buddhist figures, political life of the Nanzhao Dynasty, religious beliefs of the Kingdom of Dali and images of people from other countries in Asia.

The artistic representation of the stone carvings is extremely creative. Under the precondition of not going against religious doctrines, the ancient sculptors tried everything to create the human-based images to artistic perfection, so as to present vividness via images and to influence all people in the mortal world. Bearing distinctive national characteristics and artistic vitality, the lifelike sculptures are not only treasures of Chinese stone carving art, but also the invaluable wealth of the Buddhist art.

The optimal season to visit the Shibao Hills is the end of the 7th month and the beginning of the 8th month of the lunar calendar. There is a traditional singing and dancing jamboree held each year, which never fails to enchant visitors. 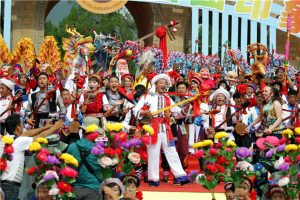 Shibao Mountain Song Festival is a grand traditional ethnic festival of Bai Minority. The fesitival starts from the 26th day of the seventh lunar month and ends at the first day of the eighth lunar month.
During the festival, the Bai people from Jianchuan Eryuan, Lijiang, Dali, Lanpin and other places, will come wearing national costumes. The song festival is the grand gathering of Bai people to express feelings and also a communication of poetry art and the bridge of inheriting folk literature and art. Shibaoshan Bai song has been listed in international list of national songs.
Fenghuang Ancient City Museum in Xiangxi
Romantic Show of Jiuzhaigou (Jiuzhai Qianguqing)
Lamma Island in Hong Kong
Beijing Traditional Opera Museum