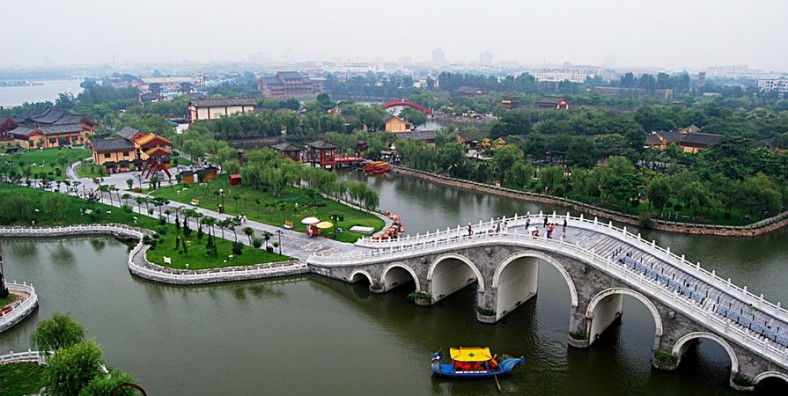 Millennium City Park is a large-scale historical cultural theme park in accordance with the proportion of one-to-one with the masterpiece Riverside Scenes at Qingming Festival, a Chinese art treasure painted by Zhang Zeduan, a famous artist of Northern Song Dynasty.

Millennium City Park is located in the northwest of Kaifeng, the west shore of the pretty Longting Lake, which is a large-scale historical cultural theme park in accordance with the proportion of one-to-one with the masterpiece Riverside Scenes at Qingming Festival, a Chinese art treasure painted by Zhang Zeduan, a famous artist of Northern Song Dynasty. It was founded in 1992 and opened to the public in 1998, the 5A national park covers 40 hectares and has over 50 ancient decorated boats and more than 400 buildings in Song style.

‘Along the River During the Qingming Festival’

This picture is depicting life along Bian River during the Qingming Festival. The scenes in this painting are highly detailed and the spectacle is magnificent. There are large numbers of people and buildings. The people are shown in a variety of contemporary clothes that indicate their social standing and occupations. The lively throng includes many animals and it is not difficult to imagine the sounds in the street scenes where the people are crowded and noisy.

Millennium City Park is a lively life show for social custom, social life, building structure and landscapes of that time, lines of ancient shops and hotels, kinds of Song style mansion and houses, various shows of ancient custom and activities, classical music of Song style, and more than 1000 staffs wearing ancient costumes and walking up and down or performing kinds of folktales of Song Dynasty.

The Lantern Party held around lunar January 15th is a tradition in Kaifeng started since Song Dynasty. In the party, a wide range of ingenious designed lanterns add great glories to this ancient city.