Memorial Hall to the Victims in the Nanjing Massacre 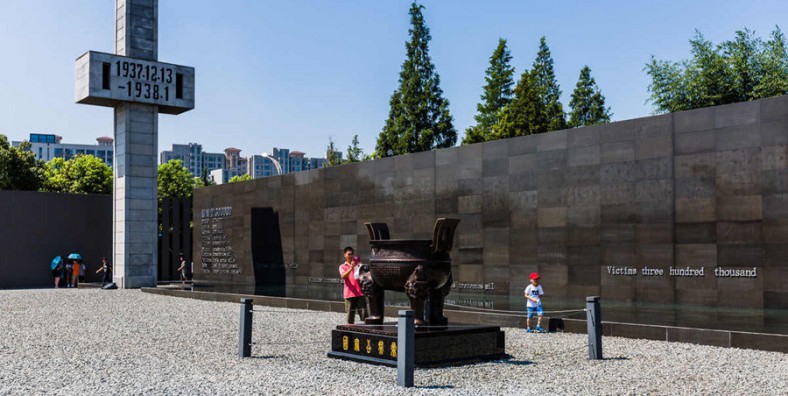 The Nanjing Memorial Hall was built in 1985 by the Nanjing Municipal Government in memory of the three hundred thousand victims of the massacre. In 1995, it was enlarged and renovated. The memorial exhibits historical records and objects, and uses architecture, sculptures, and videos to illustrate what happened during the Nanjing Massacre. Many historical items were donated by Japanese members of a Japanese–Chinese friendship group, which also donated a garden located on the museum grounds.

On December 13, 1937, the Japanese Army occupied Nanjing (also spelt Nanking)–then the capital city of the Republic of China. During the first six to eight weeks of their occupation, the Japanese Army committed numerous atrocities, including rape, arson, looting, mass executions, and torture. China estimates that approximately three hundred thousand civilians and unarmed soldiers were brutally slaughtered. This estimate was made from burial records and eyewitness accounts by the Nanjing War Crimes Tribunal and included in the verdict for Hisao Tani. Corpses littered the streets and were seen afloat in rivers for weeks, and many structures in the city were burned down. Countless shops, stores, and residences were looted and sacked.
Japanese soldiers were also reported to have conducted killing competitions and bayonet practice using Chinese prisoners. Approximately twenty thousand cases of rape occurred within the city during the first month of the occupation, according to the “Judgement of the International Military Tribunal”. Even children, the elderly, and nuns are reported to have suffered at the hands of the Imperial Japanese Army.

The outdoor of Memorial Hall to the Victims in the Nanjing Massacre exhibits all vividly represent grief and indignation, life and death. The outdoor exhibit include statues, sculptures, relief carvings, tablets, and a large wall listing the names of victims, as well as an atonement tablet and memorial walkway. The memorial walkway displays footprints of survivors, some of which were impressed as recently as 2002. Three large groups of carved reliefs and seventeen small tablets upon which the major sites and historical facts of the massacre are carved, surrounded by withered trees and cobblestones, the wall upon which the names of the victims are listed and the atonement tablet, together form a permanent and moving record of the bloody tragedy.

The skeletal remains of massacre victims, now exhibited in a coffin-shaped display hall, were excavated from Jiangdongmen in 1985; 208 more were uncovered in 1998. Jiangdongmen Site Square – the square was built on the original site where the Japanese army slaughtered and buried Chinese captives and civilians in 1937. Skeletal remains are exhibited in a coffin-shaped display hall of Memorial Hall to the Victims in the Nanjing Massacre.

The Nanjing Massacre Memorial Hall was not built as a sign of indignation but a lasting memorial to the victims and a warning of history. The tomb-like exhibition hall, half underground, contains more than 1000 items related to the massacre, including an immense collection of pictures, objects, charts, and photographs. Paintings, sculptures, illuminated display cabinets, multimedia screens and documentary films serve to demonstrate to visitors the crimes committed by the Japanese military.

How to Get to the Memorial Hall

If you want to get rid of hustle of transportation and troublesome navigation, you can book a private tour package which covers visiting, dining and transfer from us. Our local tour guide and driver will escort you to Nanjing Massacre Memorial Hall with speed and convenience, and take care of all the details. You just need to focus on travel.

Purple Mountain or Zijin Shan(紫金山), is located on the eastern side of Nanjing in Jiangsu province. Covered by verdant trees, the main peak of Purple Mountain is 448.9 meters above sea level. Its peaks are often found enveloped in mysterious purple and golden clouds at dawn and dusk, hence its name. It is a national 5A tourist scenic spots in Jiangsu, as well as a world cultural heritage. Purple Mountain is not only full of beautiful natural scenery but also rich in cultural.

Peace Park (和平公园) a peace-themed park for people and communities from around the world to communicate and pray for the world peace. Including the Wall of Victory (胜利之墙), the Peace Park (和平公园), sculpture Peace made by white marble(汉白玉雕塑《和平》), the Zijincao Garden (紫金草花园), Friendship forest planted by Japanese(日本友人植树林)  so on.

2. The best time to travel is all year around, as it is a cultural relic.