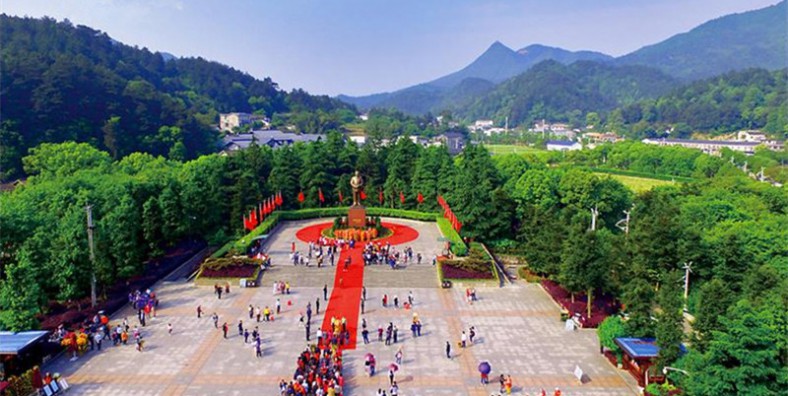 Surrounded by green pines and bamboos, the mountains are protected by arches. The bronze statue, with its tall body, steady posture, smiling and thoughtful face, successfully shaped the great style of the leader when he was in founding ceremony.

Why is Mao Zedong Bronze Statue Square So Special?

Surrounded by green pines and bamboos, the mountains are protected by arches. The bronze statue, with its tall body, steady posture, smiling and thoughtful face, successfully shaped the great style of the leader when he was in founding ceremony. On the base of the bronze statue are engraved the five gold-lettered characters “Comrade Mao Zedong” inscribed by Jiang Zemin. The bronze statue of Mao Zedong was designed according to the image of the chairman on the founding ceremony. The chairman sits in the southwest and faces the northeast. His body is gigantic, he is holding a speech, he is dressed in a Chinese tunic suit, his eyes are bright, his smile is slight, and he is in high spirits. The bronze statue is 6 meters high and weighs 3.7 tons. The red granite base is 4.1 meters high and the whole height is 10.1 meters.

Among them, the viewing space covers an area of 1112 square meters and the bronze statue is surrounded by 56 cedar trees on three sides, symbolizing the unity of 56 ethnic groups in our country around the Party Central Committee, forming a thick and spectacular background forest effect. This area is mainly for tourists to pay their respects to flowers and express their respect for Chairman Mao. The visiting space covers an area of 1700 square meters, which is 12 steps away from the viewing space. It is mainly used for tourists to take pictures and watch large-scale commemorative activities.

Stage use; The memorial space covers an area of 5,950 square meters, which is 12 steps away from the visiting space. The area is mainly used for tourists to evacuate, commemorative activities and gatherings. The leisure space area is mainly located in the creation of a viewing atmosphere for tourists to relax and visit the bronze statue, with landscape boulevards and stone carvings on the central axis.

There is a landscape stone at the entrance of Zhanyang Avenue on the central axis of the square. There is a landscape stone inscribed with the words “China has a Mao Zedong” written by Mr. Shen Peng, former chairman of the Chinese Calligrapher’s Association. There are six symmetrical small landscape stones on both sides of the road, inscribed with Chairman Mao’s poems such as “Qin Yuan Chun Xue”. The plants in the surrounding green areas are arranged in a way of “seeing red all the year round”, and trees and shrubs form a knot.

What are the wonders of Mao Zedong Bronze Statue Square?

Shaoshan is suitable for traveling all the year round, and the best season is from March to October.

Mao Zedong Bronze Statue Square is an outdoor scenic spot. Rain may cause some inconvenience to visitors. Please pay attention to the weather changes when traveling. Regionally speaking, the scenic spot is located in Shaoshan District, Shaoshan District is located in a subtropical humid climate zone with four distinct seasons, Leng Xia is hot in winter, hot in summer and short in cold.