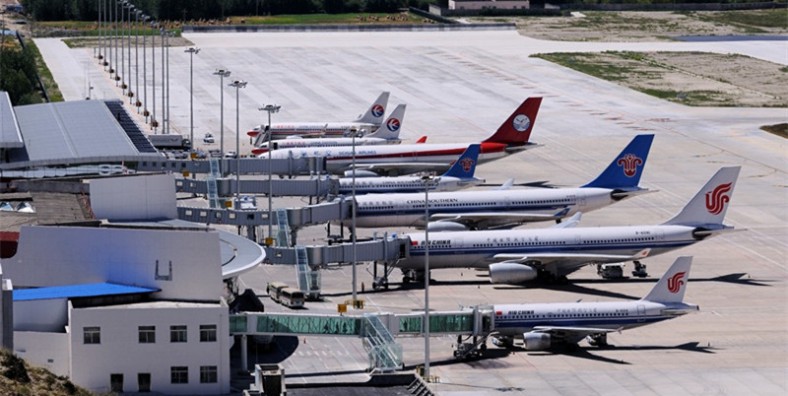 Lhasa Gonggar Airport (Chinese: 拉萨贡嘎机场, Standard Tibetan: ལྷ་ས་གོང་དཀར་གནམ་གྲུ་ཐང་; IATA: LXA, ICAO: ZULS) is the airport serving Lhasa, the capital city of the Tibet Autonomous Region, China. It is about 62 kilometres (39 mi) southwest of the city in Gonggar County of Shannan. The airport is close to the road to Tsetang, the seat of Nêdong District and the capital of Shannan.[1]

Building an airport in Tibet, which is termed in flying parlance as going over a “hump” in the Tibetan Plateau, has gone through a process of trial and error through many hazardous air routes and several fatal accidents during World War II. The first airport was built in May 1956, in the southwest of Damxung County at a height of 4,200 metres (13,800 ft). An Ilyushin Il-12 and a Convair CV-240-401 were the first aircraft that landed at Damxung airport from the north and south. They thus broke the jinx of the “forbidden air zone”, and this was acclaimed a feat. It took almost nine more years before the first Beijing-Chengdu-Lhasa air route became operational in 1965.

In 1965 the Gonggar Airport was constructed. Damxung Airport was decommissioned later (converted into a race course) and the Lhasa Aviation Office was moved from Damxung to Gonggar Airport. This established the Gonngar Airport as the second airport in Tibet. Over the years, with more expansion of the facilities, Gonggar became the domestic hub in the Tibetan Plateau connecting many other airports in Tibet.[3]

Gonggar Airport is in Gyazuling township of the Gonggar County. It is built in the county where Yarlung Tsangpo River (the Brahmaputra River) is very wide on the right bank (southern bank) of the river providing facilities for the runways. It is for this reason that the airport was constructed at this location, though away from Lhasa where space was a limitation. The airport lies to the west of Rawa-me, which is the capital of the county, at the entry of the Namrab Valley, 87 kilometres (54 mi) from Tsetang.[4] [5] Within a radius of 30 kilometres (19 mi) the airport is surrounded by mountains with elevations ranging from 5,362–6,126 metres (17,592–20,098 ft).[6] Access to the airport from Lhasa has been further facilitated by constructing a road tunnel, which has reduced the distance and time taken to reach the airport from Lhasa by 40 minutes; time of travel from Lhasa is now about 40–60 minutes by shuttle bus services.[2] The tunnel and Lhasa Airport Expresswayopened in July 2011.[7]

At an elevation of 3,500 metres (11,500 ft) above sea level, the airport is one of the highest in the world. Its runway, with airport rank 4E, at 4,000 metres (13,000 ft)[8] with a width of 45 metres (148 ft), is designed to handle wide-bodied aircraft in the thin Tibetan air. It has an area of 25,000 square metres (6.2 acres) with the passenger handling facilities of ticketing office, the baggage collection beltways and visitors gallery on the first floor of the new terminal building, and the departure lounge on the second floor with shopping malls, kiosks and restaurants. There are four aero bridges (one two-way bridge and three single-way bridges) to facilitate passengers to board and disembark from the aircraft.[2] The airport began operation in 1965 with flights to Beijing and Chengdu commencing that March. Recent additions included the expansion of the existing terminal in 2004 and as a result the airport has the facility to check in 1,300 passengers per hour during peak hours.[2][3][6][9]

The airport has parking facilities for five Airbus A340 or seven Boeing 757 aircraft.[2]

The airport is connected to the rest of China, which includes cities such as Beijing, Chengdu, Shanghai, Guangzhou, Hong Kong, Chongqing, Xi’an, Xining, Kunming, Diqing and Chamdo Region. There is an international route connecting Kathmandu, Nepal and Lhasa.[2]

All flights to and from the Lhasa Gonggar Airport are handled by seven Chinese-based airlines: Air China, China Eastern, China Southern, Shenzhen, Hainan, Sichuan, and Tibet Airlines. During tourist season (roughly April to October), there can be as many as 40 domestic flights every week to and from Gonggar, carrying on average as many as 700,000 passengers every year. There is only one international route at present: a once or twice weekly (depending on the season) flight to and from Kathmandu. It is typically not possible to purchase air tickets directly from these carriers given the requirement of obtaining the necessary governmental travel permit, which is not the same as the visa to gain entry into the rest of mainland China. It was expected that this figure would reach 110,000 by the year 2010.[2]

Pilots landing at Lhasa Gonggar Airport must be specially trained in handling manoeuvres at landing at the high altitude of 3,700 metres (12,100 ft).[1] Incidentally, Nagqu Dagring Airport is expected to become the world’s highest altitude airport by 2014 at 4,436 meters above sea level.[10]

Given the frequency of strong air currents picking up in the afternoon, most flights into the airport are scheduled in the morning.[1]

A night landing facility was created by fixing navigational lighting facilities on the runway at a cost of 99 million yuan (US$13.2 million) only in 2007. This adds to the handling capacity of the airport by about 40%.[11] The night landing facility was commissioned on 14 November 2007 with the landing of an Airbus A319 aircraft of Air China carrying 90 passengers. This facility was made operational initially once a week on Wednesdays from Chengdu Shuangliu International Airport in Sichuan Province. With this facility the airport planned to handle 1.1 million passengers every year by 2010, as against 1.005 million in 2007.[12]

The airport was able to accommodate an Airbus 330 overnight for the first time on April 11, 2017, a problem due to the airport’s high altitude.[13]

A new highway between Lhasa and the Gonggar Airport has been built by the Transportation Department of Tibet at a cost of RMB 1.5 billion yuan. It is a four-lane road of 37.68 kilometres (23.41 mi) length. This road is part of the National Highway 318; it starts from the Lhasa railway station, passes through the Caina Township in Qushui County, terminates between the north entrance of the Gala Mountain Tunnel and the south bridge head of Lhasa River Bridge, and en route goes over the first overpass of Lhasa at Liuwu Overpass.[14]