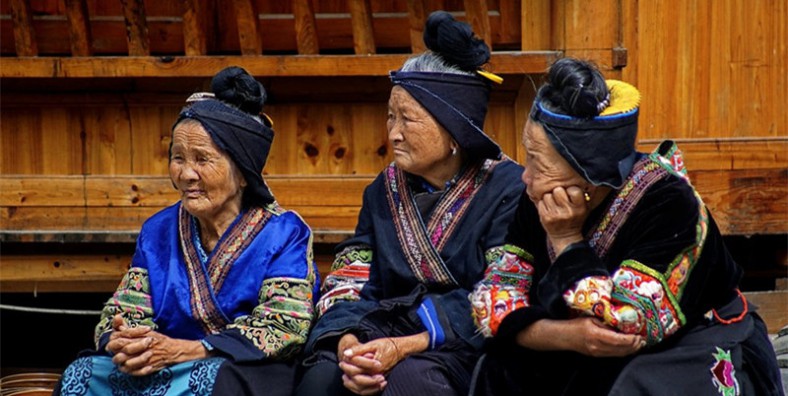 As the country's first folk custom village tour site, it is famous and real: Diaojiaolou, Lusheng Hall and Fengyu Bridge are all many.

Why is Langde Miao Village So Special?

Up to now, there are 147 households and more than 500 people in the village, all of whom are Miao compatriots, mainly Chen and Wu. Langde Shangzhai is surrounded by mountains and rivers, with its back to the south and north, and all sides surrounded by mountains. Maolin and Xiuzhu set off the antique diaojiao building. The winding mountain road is hidden in the green forest and green vine, and the melodious Miao flying songs reverberate in the mountains in the wilderness from time to time.

Where is Langde Miao Village

Langde Shangzhai is located in the upper reaches of Bala River at the foot of Leigong Mountain, the main peak of Miao Ling, 27km from Kaili City, the capital of Qiandongnan Prefecture, and 17km from Leishan County.

From 1855 to 1872, the Qing Xianfeng ruled together with the Miao people to fight against the Qing Dynasty. After the defeat of the anti-violence campaign, the Qing army fought for 18 years to pacify the rebel general Yang Daliu’s stronghold.

This is a Miao village with 100 families. Langde Shangzhai is a paraphrase of Miao language “Nengdui” meaning “Nengdui” in the lower reaches of the Oudui River. The village is named after the river, “Ondui” means Shangzhai. Langde Shangzhai is named because it belongs to the upper part of Langde Land. The costumes of the Miao people in the village are characterized by long skirts, so they are also called “long skirt Miao”. Langde Town is endowed with unique ethnic tourism resources. There are “Hometown of Chinese Folk Song and Dance” and “Hometown of Lusheng” in the town, which are renowned both at home and abroad. Longde Shangzhai Ancient Architecture Group is listed as the fifth batch of key cultural relic protection units in China.

Before entering the village, one could see from a distance that the road leading into the village was already full of Miao people welcoming tourists.

Through the well-preserved wind and rain bridge under the mountain stronghold, reach the viewing platform opposite the village, where you can have a panoramic view of the entire Langde Miao village. Compared with some Miao villages, the Langde Miao village is not big, but it has its own unique charm. Langde Shangzhai is surrounded by mountains and full of ancient meaning.

In Langde Miao Village, the enthusiasm of the Miao people was formally experienced. From the 12 bowls of wine from the gate of the village to the mountain and flowing water of Chinese food, the feeling of intimacy was increased. Each bowl of wine was filled with their enthusiasm and welcome. The Xanadu seen in front of us must have been the image of the heart for many times.

If Diaojiaolou is the symbol of Miao village, then the old man is the soul of the village. The most leisurely life is actually the most ordinary. Langde Miao village has picturesque scenery and simple and natural life. The old people in Miao village live very simple lives, chatting under the eaves or sitting simply in their spare time.

Every weekend is the liveliest time in the stockade. Usually there is no activity in the stockade and the whole village seldom gets together. Only when the number of tourists increases at the weekend will there be an original Miao ethnic performance, so that tourists can really feel the Miao ethnic customs.