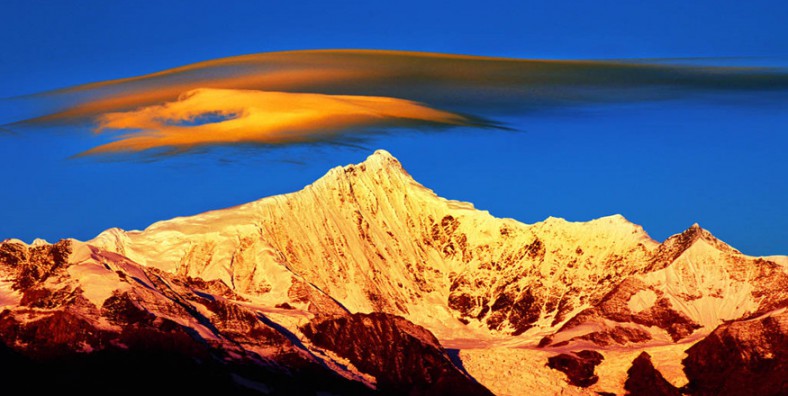 Meili Snow Mountain is located about 10 kilometers north-east of Deqin County, Diqing Tibetan Autonomous Prefecture of Yunnan Province. It is 849 kilometers away from Kunming.It is a holy land of pilgrimage for Tibetan Buddhists, and ranks the first among the eight sacred mountains in Tibet (the eight sacred mountains: Mount Benri, Moerduo Mountain, Kawagebo Peak of Meili Snow Mountain, the Aemye Ma-chhen Range, Mount Kailash, Gaduojuewo, Yalxiangbo and the Himalayas).

There are 13 peaks with an average altitude of over 6,000 meters on Meili Snow Mountain, referred to as the 13 prince peaks. The main peak, Kawagebo, is a snow mount in a pyramid shape, commonly known as the Goddess of Meili Snow Mountain.So far, no one has ever climbed up to the summit of Kawagebo, which is 6,740 meters above sea level and the highest peak in Yunnan. The famous superb scenery of the sun shining over the snow mountain attracts a great number of backpackers. It’s known for the grandest view in Yunnan Province, Meili Snow Mountain boasts a number of snow-clad ridges and peaks, thirteen of which exceed 6,000 meters (19.685 feet) above the sea level. The most splendid view is the Kawagebo Peak, the highest in Yunnan Province rising about 6,740 meters (22,112.86 feet). It is still a ‘virgin peak’ for no one has ever reached the top. Thus, Meili Snow Mountain is a challenge for all mountain explorers from home and abroad. The continuous mountain ridges feature snowy peaks and the sun throws golden lights on the low-floating clouds and the top of the snow peak which form various extraordinary scene. But mostly, the mountain presents itself as mystery when dense fog and clouds made it a gleaming sight to see and you could hardly resist the temptation to unveil it. You can have a panoramical view of the thirteen towering peaks from the Feilai Temple viewing platform which is facing Meili Snow Mountain. it stretches for several hundred kilometers and accounts for 34.5% of the total area of Deqin County.

From the foot of the Kang Karpo Peak, you see the unique low-altitude glaciers formed in modern times. Strong updrafts collide with cloud airflow from the inner continents in this area producing frequent dense fog and heavy snow. The topographic extremes result in the hanging glaciers, icefalls and snow slides. The Mingyong Glaciers, in particular, rushes from an elevation of 5,500 meters (18.045 feet) down to the forest zone 2,700 meters (8,858 feet) above the sea level in rainy seasons. It looks like a huge white snake wriggling its way among the verdant mountains from afar. On the south side of the peak, a waterfall named ‘holy collapsing rain’ falls from thousands of meters high. Pure water splashed from snow cracks with the help of the sunlight, rainbows are often catched above the fall. Owing to its high altitude, the mountain owns several climatic zones with a diversity of plants, vast expanse of grassland and rich fungi species that are vertically distributed. The types of vegetation here range from the Torrid Zone to Frigid Zone vertically. From the altitude of 2,000 meters (6562 feet) to 4,000 (13123 feet) meters, forests flourish with varieties of spruce. The depth of the forest is an exotic world of rare birds and animals. The meadows surrounding the forests are embellished by endless flowers which add more vitality and charm.

Meili Snow Mountain is one of the most sacred mountains of Tibetan Buddhism. ‘Kang Karpo Peak’ means the God of Snow Mountain in Tibetan, and is a holy land for worshiping. Pilgrims from Tibet, Qinghai Province, Sichuan Province,and Gansu Province come here at the beginning of each winter to worship. Thousands of devout pilgrims worship together and encircle the holy mountain, adding even more mystery and loftiness to it. Due to the topography from north to south, the river valley opens toward the south, which enables the airflow to rise upwards in the valley. With strong influences by monsoon, distinct wet and dry seasons, and high and steep mountains, it presents a highland cold temperate climate. In summer, the temperature is 11-29℃. Compared to the valley area, the temperature is 10-20℃ in the mountainous area the coldest month is from December to February. In January, the temperature is 7-12 degrees during the day and 2-5 degrees at night. During the period between November and March, the weather is very nice. In winter, there are a few days of snow, which may stop visitors passing with their vehicles.

Besides the complex topography, Meili Snow Mountain is much more complex in its weather changes. It may snow, rain or turn cloudy or sunny within a few seconds. The average annual rainfall is 600 millimeters, and the rainy season is generally between July and August.

The ideal seasons to visit Meili Snow Mountain are from October to May. The best season is after the end of October, when you can view the main peak because of the nice weather, clean air and the high transparency there. However, in other seasons, to see the main peak you have to depend on your luck. You are more likely to have a chance to see the snow-covered mountain in the early morning when the sun has just come out.

How to Get to Meili Snow Mountain from Shangri-la The area around Meili Snow Mountain is a sparsely populated region. Most of the inhabitants are Tibetans. The biggest event should be the Inner Pilgrimage and the Outer Circumambulating Pilgrimage. Pilgrimage is the custom of Tibetan people, it’s an act of religious observance and respect for nature, undertake a pilgrimage on foot around some sacred places like a mountain, a lake or a temple. Each year multitudes of pilgrims spare no efforts and travel long to conduct their Buddhist circumambulations to Holy Mountains and Lakes for good luck and ascending to the paradise after death.

The Route of Inner Pilgrimage

The Route of Outer Pilgrimage