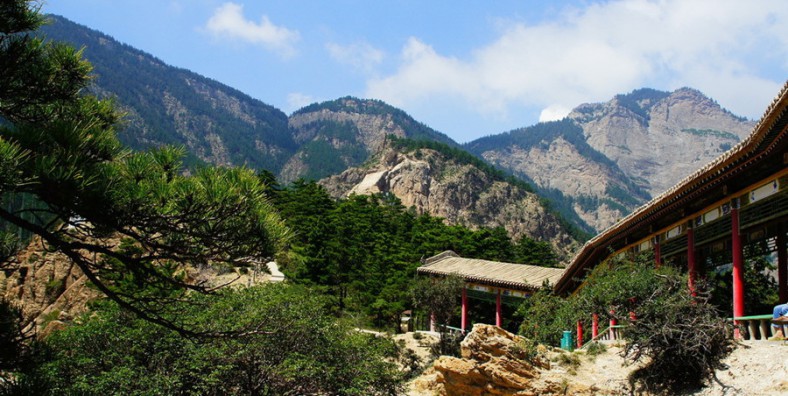 Helan Mountain is a north-south mountain range located in the boundary of Ningxia and Inner Mongolia, which is an important geographical boundary in northwestern China. It stretches 220 km from north to south and 20 to 40 km from east to west, and the elevation is 2,000~3,000 m. The east side of the mountain is towering and precipitous, and the west side of it is flat and gentle. The mountain is majestic and looks like horses galloping.

There are several east-west valleys in the Helan Mountain. The famous ones are Helankou(贺兰口), Suyukou(苏峪口), Sanguankou(三关口) and Baisikou(拜寿口). They have been the main traffic routes since ancient times.The Xixia scenic spots in the piedmont area are rich and colorful, including Xixia Mausoleum(西夏陵园), Rolling Bell Gate(滚钟口), Baisikou Twin Tower(拜寺口双塔) and other places of interest and unique Shahu(沙湖) Scenic Area.

Helan Mountain is rich in forest resources. Its forest area is about 240 square kilometers. The main plants are spruce and pine, and the rest are poplar, hawthorn, birch and various wild fruit trees and shrubs. There is also a small subalpine shrub and meadow in the upper part of the mountain, which is a good summer pasture.

Helan Mountain has unique geographical conditions, high accumulated temperature, low precipitation, abundant sunshine, soil permeability, rich trace elements and unique terroir conditions, which making it one of the most recognized “golden areas” for the cultivation of high-quality wine grapes. The grapes grown here have the natural advantages of complete aroma development, good pigmentation, high sugar content, moderate acid content, no pests and diseases, no pollution, and good quality. Therefore, it has become one of the best place to produce high quality grape wine in the world.

In ancient times, this mountain is the homelands of northern China minorities include Huns, Xianbei, Tujue, Uighur and Tibet. They carved the scenes of their daily lives on the stones of the mountain 3,000 to 10,000 years ago. The pictures reappear the aesthetic taste, social customs and life style of ancient people. On the 220 km mountain range, there are more than 20 spots of rock paintings. The contents of the rock paintings include forest-steppe animals, grassland animal and human head portraits. Most of them are carvings and a small amount of them are colored drawings. The most classic ones are located in the Helan Pass. The rock paintings have abundant contents and painting styles, and they are vivid and full of imaginations. The paintings bring us precious information of ancient human beings and an enjoyment of art.

The Two Pagodas in Baisikou

The Two Pagodas in Baisikou are located in Baisikou of Helan Mountain. They are the best-preserved Western Xia (1038-1227) pagodas with an age of 1,000 years old. These pagodas are extremely rare treasures in Chinese pagodas, which play important roles in archaeology, Buddhism, research and appreciation.

How to Get to Helan Mountain

It is recommended to start from Yinchuan for a visit to the mountain. Take the bus Travel Line 2 in Xinyue Guangchang in Yinchuan, which stops at Gunzhongkou, Suyukou and Rock paintings of Helan Mountain. The bus departs at 8:00 and 9:00 am every day from April 20th to October 20th. Ticket fare is CNY 8-15 based on riding distance.

One thought on “Helan Mountains in Ningxia and Inner Mongolia”