Best Time to Visit: March to June, September to December

Why is Haba Snow Mountain So Special

Haba Snow Mountain is a mountain rising above the northwest side of Tiger Leaping Gorge in Yunnan, China. It rises opposite the higher Jade Dragon Snow Mountain, and towers 3,500 metres above the upper reaches of the Yangtze River(Jinsha River). The summit of the mountain is a popular destination for amateur mountaineers and its lowest slopes are crossed by the popular Tiger Leaping Gorge trail. Its massif is considered the southernmost extent of the expansive Shaluli Mountains, themselves a component range of the Hengduan Mountains.

Where is Haba Snow Mountain – Location

Haba Snow Mountain or Haba Xueshan is located in 120 kilometers southeast Shangri-La city, Yunnan province. Mountain raises 5396m above the sea level, and is one of the tallest peaks in Yunnan province. Its lowest slopes are crossed by the popular Tiger Leaping Gorge trail.

Jinsha River in northern Yunnan province refers to the upper section of the Yangzi River. She runs between her sisters – the Salween and Mekong Rivers. She wanted to marry the eastern sea and made a sudden turn east to meet the sea, while her way was blocked by her jealous brothers, Haba and Jade Dragon Snow Mountains. They guarded her way day and night until one night, when Haba fell asleep on duty, Jinsha slipped past speedily leaving the deep Tiger Leaping Gorge behind her. When Jade Dragon awoke to find his sister gone, he was so angry with Haba that he beat one side of Haba’s face. So, Haba’s head fell on the western side, leaving his peak little shorter and flatter today. 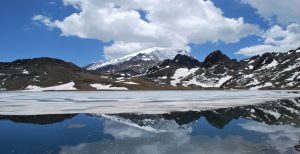 Tourists can take a bus to Haba Village and it will take about five hours from Lijiang and four hours from Shangrila. Or hike from Tiger Leaping Gorge to Haba Village, which will be more adventurous and strenuous. Renting a car to Haba village is also available.

► Ancient – February 1995, Haba snow mountain was an unknown place.
► In April 1995, Li Shunyou, a villager of Haba Village, first climb to the top of Haba Snow Mountain individually.
► In October 1995, Jinfeibiao of Yunnan Tanxian Travel Agency led a team of 4 people for the first time to climb to the top of this mountain along the traditional route of northwest side of slope.
► In October, 1999, outdoor climbing team of Meili Yunnan reached the summit along the northwest ridge of north slope in the first time.
► Since 1995, there were more than 200 people reached the summit successfully. 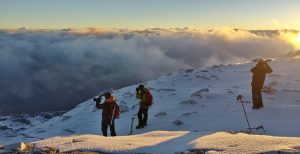 ► Snow Peak: It is covered by snow year-round. The upstanding main peak, together with four little peaks around it, seems to be a shining crown on a fine day in the distance.
► Magnificent Glaciers: The glaciers that cover Haba mountain, known locally as the “snow sea”, lie about 4,000 meters above sea level on the northwestern slope of the peak of Haba.
► Black Sea: It gets its name from the color of its water which is as black as ink. An abundance of Chinese giant salamanders will swim together forming a ring in the shallows of the Black Sea with an appropriate temperature is reached, which makes it more attractive.
► Wonderful Waterfalls: There are also hanging springs and waterfalls in Haba Snow Mountain including Jianshan Waterfall, Dadiaoshui Waterfall, etc.
► Beautiful Azaleas: From April to June, there are more than 200 hundred kinds of azaleas are distributed from the bottom to the top of the mountain, accounting for 70% of those in Yunnan.

Recommend you to start with a warm-up trekking from Tiger Leaping Gorge to Haba Village first instead of arriving Haba Village directly by bus. It allows you to experience the typical process of climbing a snow mountain from trekking to the Base Camp and the final summit. 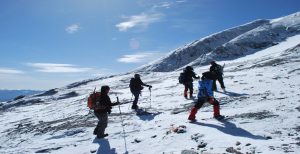 Haba Snow Mountain is the ideal destination for amateur mountaineers. A common tourist can reach the summit successfully at the elevation of nearly 5,400 meters if well equipped and prepared adequately. From Haba Village to the Base Camp, it takes an average walk of 5-6 hours. The Base Camp is at the altitude of 4,100 meters. From here, hike up to 4,900 meters in 3 hours, and another 2 hours to the top. If there is no snow up to the 4,900m point, you can easily get there in 2 hours, and another 1.5 hours to the top (5,406 meters). 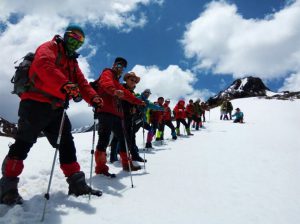 Best time to climb Haba Snow Mountain is between mid of March till end of June and mid of September till mid of December. Because the other periods are mostly rainy or windy. From April to June, the blossoming rhododendra add more glamour to mysterious Haba Snow Mountain. In the late autumn, the forest is full of color, the air is pure, and the starry sky can be photographed. From November to December, the light wind makes tourists more easily to climb up to the summit.

There are not many accommodation choices around Haba Snow Mountain. Accommodation is basic and similar throughout most of the Haba Village. Most of guesthouses provide equipment for climbing. There are huts at the base camp. During summer time you can camp and sleep in a tent, while in winter staying in the hut is the best option. It is good enough to spend the night, with simple beds and served as a good shelter from wind.

► Although Haba Snow Mountain is considered a perfect mountain for beginners, there are some accidents happened sometimes, so everything needs to be paid full attention and taken care of.
► If you also plan to climb Haba Snow Mountain without any previous experience, it is doable, but hire a mountain guide, at least for the first time.
► Be ready that your plans ascending mountain top can be canceled. If you have time, stay more days at the base camp, and climb when the weather is good.
► It is very important to have suitable waterproof shoes and clothes,warm gloves, hat, head lamp, couple a pair of socks, sunscreen, lip balm; take also mobile power bank, hiking stick. Sleeping bag is very useful, especially if you visit during winter.