Tibet Autonomous Region, Zang for short, is located in the southwest of China, the main part of Qinghai-Tibet Plateau, and one of the five autonomous regions for ethnic minority in China. Lhasa is the capital of Tibet Autonomous region. It borders on Sichuan and Yunnan provinces to the east, Qinghai and Xinjiang to the north.  It Neighbors Burma, India, Bhutan, Nepal, Kashmir as well as other countries and regions, the land boundary of more than 4000 kilometers, is an important gateway to the southwest border of China. Famous for the "Roof of the World", the region has an average elevation of more than 4,000 meters with various complex landforms, such as: high and steep mountains, deep valleys, glaciers, bare rocks and Gobi deserts. It is bitterly hot in summer, with a distinct difference in temperature between day and night.

History Fact
Tibet is an inalienable part of Chinese territory. Since the Yuan Dynasty, the central government has exercised effective jurisdiction over Tibet all the time. The Tibetan people are an important member of the great family of the Chinese nation. Tibet was called "Tubo(吐蕃)" in Tang and Song dynasties, "Wusizang" in Yuan and Ming dynasties, and "Tangut(唐古特)" and "Toubert(图伯特)" in Qing Dynasty. Since the reign of Kangxi in the Qing Dynasty, Tibet has been known as "Tibet" until today. on May 23, 1951, Tibet was peacefully liberated. After the rebellion in Tibet was calmed down in 1959, the central government began to exercise full and direct jurisdiction over Tibet. On September 9, 1965, the Tibet Autonomous region was officially established. Tibet is famous for its magnificent and magical natural scenery. It is vast, spectacular and rich in resources. Since ancient times, people on this land have created rich and splendid ethnic culture.

The Qinghai-Tibet Plateau is the latest, largest and highest plateau in the world, so it is called the "roof of the world" and is regarded as the "third pole of the earth" outside the Antarctic and Arctic. The Tibetan Plateau is located in the main area of the Tibetan Plateau. The landforms can be divided into Himalayan region, southern Tibetan valley, northern Tibetan plateau and mountain canyon area of eastern Tibet.

1. Himalayan Region喜马拉雅高山地区
The Himalayan alpine region, in southern Tibet, consists of several roughly east-west mountain ranges, with an average elevation of about 6000 meters. Located on the border between China and Nepal, Mount Everest in Dingri County, Tibet, is 8844.43 meters above sea level, the highest in the world. The top of the Himalayas is covered with snow and ice all the year round, and the climate and geomorphology on both sides of the Himalayas vary greatly.

2. Southern Tibetan Valley藏南谷地
The southern Tibetan valley lies between the Gangdise Mountains and the Himalayas, that is the region through which the Yarlung Zangbo River and its tributaries flow. There are many river valley plains and lake basin valleys in this area. With flat terrain, fertile soil, it is Tibet's main agricultural region.

4. Mountain Canyon Area of Eastern Tibet藏东高山峡谷区
Eastern Tibet mountain canyon area, that is, the famous Hengduan Mountains. Located roughly in the east of Nagqu, it is a series of mountains and deep valleys with east-west trend gradually turning to the north and south, during which there are three major rivers, the Nujiang River, the Lancang River and the Jinsha River. The everlasting snow on the top of the mountain, the dense forest on the hillside and the evergreen pastoral garden at the foot of the mountain make up the magnificent landscape of the three parallel rivers in the canyon area.

Climate
Tibet's climate is unique and complex due to the effects of topography, geomorphology and atmospheric circulation. The climate has the characteristics of cold and dry in the northwest, warm and humid in the southeast. Therefore, the climatic types from southeast to northwest are: tropical, subtropical, plateau temperate, plateau Subfrigid zone, plateau cold zone and so on. Three-dimensional climate is obvious.

Early history Humans inhabited the Tibetan Plateau at least 21,000 years ago. This population was largely replaced around 3,000 BP by Neolithic immigrants from northern China, but there is... 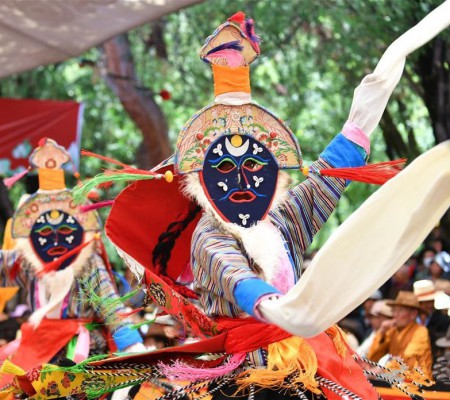 藏戏  Tibetan opera Inscribed in 2009 on the Representative List of the Intangible Cultural Heritage of Humanity Tibetan opera, the most popular traditional opera of minority ethnic groups in China,...