Double Third Festival is a traditional festival of many ethnic groups in China, among which the Zhuang nationality is the typical one. In ancient times, young men and women of the Zhuang nationality gathered in the streets singing happily and gathered by the river for a banquet. During the festival people would cook  five-colored rice and colorful eggs to eat and celebrate. It is not only a traditional spring outing festival, but also an important day for the Zhuang people to worship their ancestors, Pangu and Buluotuo. People in Guangxi Zhuang Autonomous Region have 3 days off. More about Double Third Festival.

2. Nadam Fair of the Mongolian

Naadam Festival is Olympic Games of Mongols and held in the most enjoyable and festive month of July or August. It is the only one of its kind, which is a sophisticated and eloquent expression of nomadic culture. It is also the celebration of a national independence, and an outstanding combination of arts and sports. The wrestling, horseracing and archery are the top three sports during the festival. It is not only sports game including art, tricks, tactics but also ethic and cultural performance such as singing, dancing, traditional costume, parade, etc. More about Nadam Fair of the Mongolian.

Shoton Festival, commonly known as the Yogurt Festival, is a great festival in Tibet, starting on the last day of the sixth month in Tibetan Calendar and lasting for a few days. It is one of the most popular traditional festivals in Tibet and an annual festival held at Norbulingka in Lhasa, Tibet. It began in the 16th century with a banquet given by the lay people for the monks featuring yogurt. The beautiful grounds of the Norbulingka are filled with partying groups shielded from the wind by gaily coloured hanging walls of rugs and printed canvas. More about Shoton Festival in Tibet.

The Water Splashing Festival (Water Spray Festival) is the grandest traditional festival of Dai nationality. During three days in the mid April every year, people splash water to each other to express best regards during the water splashing festival, which is also the New Year for the Dai ethnic group. The person who got sprayed the most water and hared most will be the luckiest. In the evening, they will hold a grand entertainment party and sing, dance, set off fireworks and guess lantern riddles continuously till mid-night. More about Water Splashing Festival.

The Torch Festival is a traditional festival celebrated by Yi ethnic group in Southwest China. It falls on the 24th or 25th day of the sixth month in Chinese calendar and last for three days. The people would light up a bonfire in front of their house and celebrate it by holding wrestling matches, horse racing, dance shows. The purpose of lighting fires is used to drive away  disease and bad energy and celebrate for a good coming harvest. It is recognized as the grandest traditional festival of the Yi ethnic minority. More about Torch Festival.

Date: the first month or the ninth month in lunar calendar
Place: Guizhou
Celebrated by: Miao, Dong
Activities: singing, bullfighting, horse racing, dancing to the rhythm of the Lusheng

The Sisters’ Meal Festival is an important festival of the Miao minority in China. Known as the ancient Chinese Valentines’ Day, it’s a celebration of love and spring, and the celebrations usually last for 3 days. There are different colored rice, beautiful ethnic costumes, and singing and dancing between single men and women. It offers opportunities for young people to find their marriage partners. There are also many other activities especially for the elders who already have a partner, including bullfighting, horseracing, drum dancing, rowing, and Lusheng music. More about Sisters’ Meal Festival. 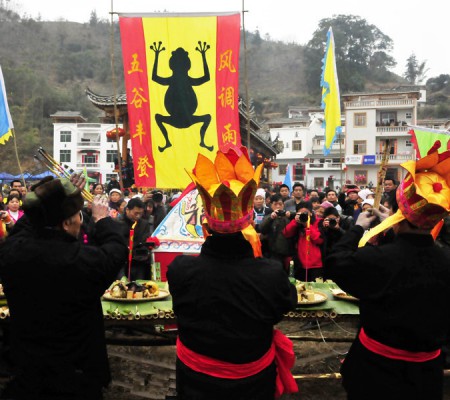 Frog totem and “Ma Guai Festival” As many other nationalities, the Zhuang people also have totems, worshipping the sun, the moon, the stars, thunder and light, crocodiles, snakes, dogs,... 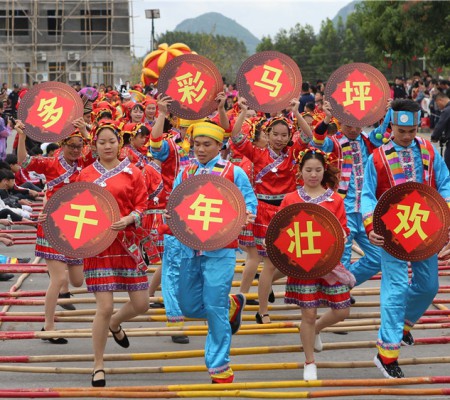 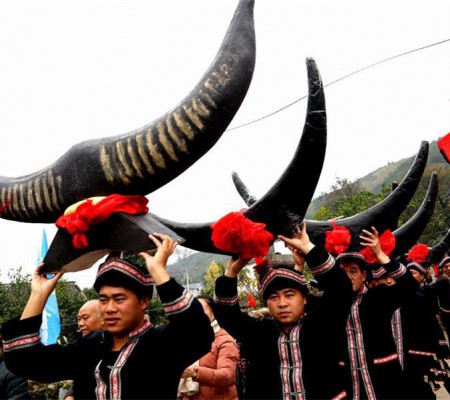 Panhu Worshipping and Panwang Festival Panhu, which is also called Panwang and Pangu, is the name of a legendary dragonlike dog. Panhu is actually a totem to the Yao...

“Slope Walking Festival” to Convey Love The “slope walking festival” is generally held in the slack seasons of spring and autumn. It is celebrated between the Spring Festival and...

“Yi Fan Holiday” features the grandest festival of Mulao people, also called “Zhi Le Gu.” In the holiday, Mulao people pray to the god to drive away the evils,... 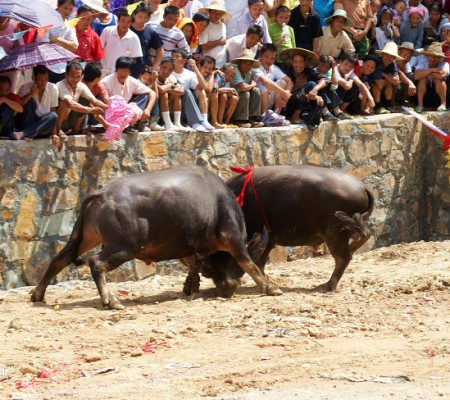 Ox Birth Festival—April 8th There are a lot of festivals for Mulao ethnic group. There are festivals in nearly each month in a year. For instance, the Spring Festival,...

March 3rd— the Li’s Valentine’s Day March 3rd in the Lunar calendar is a day of grand gathering among Li people once in a year. The gathering site is...

“Chang Ha Festival” features the grandest traditional festival of Jing people. “Chang Ha” in the Jing dialect means singing. There is a legend about the origin of the festival....

Wurigong— Newly-born Festival The “Wurigong” Festival, meaning fun day or sports meeting, is a new holiday created in 1985. It is biennially held in May or June (in the...