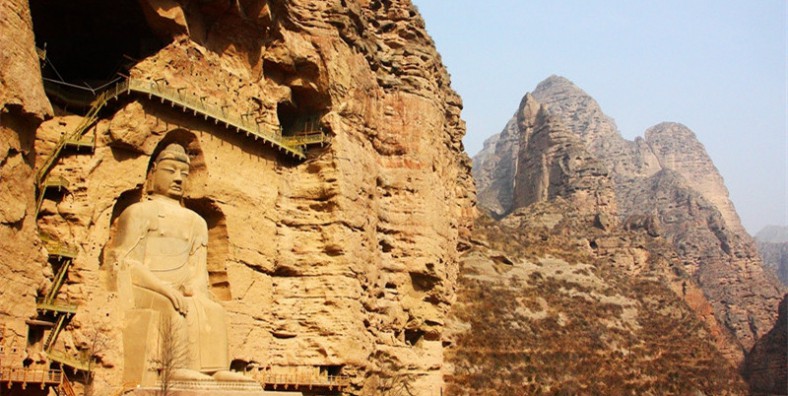 Binglingsi Grottoes are located on the west side of the Dasigou(大寺沟) of Jishi Mountain(积石山), about forty kilometers southwest of Yongjing County, Linxia Hui Autonomous Prefecture, Gansu Province. The first year of the Western Jin Dynasty (about the third century AD) was excavated in the Dasigou on the north bank of the Yellow River. Above the cliff, it was formally established in the first year of the Western Qin Dynasty (420 years), with four floors. The earliest known as the Tang Dynasty Grottoes, is the meaning of the proverbial “ghost cave”. The Tang Dynasty called Longxing Temple, the Song Dynasty called Lingyan Temple, the Ming Dynasty Yongle years later called Bingling Temple, “Bingling” for Tibetan “Sinba” The simplification of Bing Ling is the meaning of “Thousand Buddhas” and “100,000 Maitreyas”.

Binglingsi Grottoes is a series of grottoes filled with Buddhist sculpture carved into natural caves and caverns in a canyon along the Yellow River. It lies north of where the Yellow River empties into the Liujiaxia Reservoir. Administratively, the site is in Yongjing County of Linxia Hui Autonomous Prefecture in Gansu province, some 100 km southeast of Lanzhou.

Binglingsi Grottoes was built on the cliffs of Dasigou on the north bank of the Yellow River in the early years of the Western Jin Dynasty(西晋) (about 3rd century AD). It was officially established in the first year of the Western Qin Dynasty (西秦)(420 years), then was first known as the Tangshu Grottoes and was meaning of the “Ghost Cave”. It was called Longxing Temple(龙兴寺) in the Tang Dynasty and Lingyan Temple(灵岩寺) in the Song Dynasty. After the Yongle Period of the Ming Dynasty it was called Bingling temple. “BingLing(炳灵)” is the simplification of the Tibetan “Xian Ba Bing Ling(仙巴炳灵)”, which means “Thousand Buddhas(千佛)” and “ten-thousand Buddhas(十万弥勒佛洲)”. The sculptures, carvings, and frescoes that remain are outstanding examples of Buddhist artwork and draw visitors from around the world.

The Grottoes consist of three parts: Shangsi, Donggou, and Xiasi.

Shangsi were ruined by fire and what remained are only a few statues of Buddhas. In Xiasi, there are 34 caves and 14 niches still existing. Over the centuries, earthquakes, erosion, and looters have damaged or destroyed many of the caves and the artistic treasures within. Altogether there are 183 grotto niches displaying 694 stone figures and 82 clay figures in addition to more than 900 square meters of murals. The highest statue is 27 meters while the smallest one is only 20 centimeters. The statues are all with different postures and facial expressions. Binglingsi Grottoes is one of the ten largest Chinese grottoes.

Grotto No.169: Made in the Northern Dynasties (386 – 581), Grotto No.169 is the tallest one carved within a natural cave which is 8 meters deep, 26 meters wide and 18 meters high. It is the most imposing and delicate one which holds the clay sculptures of Kwan-yin, Dali Buddha (Dali means powerful strength in Chinese), etc. Dali Buddha has a round face, sitting with legs crossed. When we see this sculpture we will feel its expression as being very solemn. On its two sides stands Bodhisattvas with their hair bound, waving bare arms. The grotto also houses the largest mural in Binglingsi, which is still bright and beautiful in color.

Grotto No.171: Grotto No.171 houses the largest Buddhist statue, 27 meters high, with its upper body carved into the cliff and lower body made of clay. The statue seated cross-legged in meditation on a pedestal with the right hand resting on the lap and the left hand on the abdomen was sculptured in the 19th year of Dezong Reign of the Tang Dynasty.

Grotto No.125: Cave No.125, which holds the stone sculpture of Sakyamuni, is also one not to be missed.

How to Get there

The site is extremely remote and can only be reached during summer and fall by boat via the Liujiaxia Reservoir. Boats leave from near the Liujiaxia Dam in Liujiaxia City (Yongjing County’s county seat), and sometimes also from other docks on the reservoir. The rest of the year, the site is inaccessible, as there are no roads in the area. From Lanzhou City to Yongjing County, you can go there by expressway (around one hour). Then you can get to Binglingsi Grottoes by boat (the only way to go there and return).

The site can only be reached by boat from Yongjing County during summer and fall. The rest of the year, the site is inaccessible because there is no road in the area.