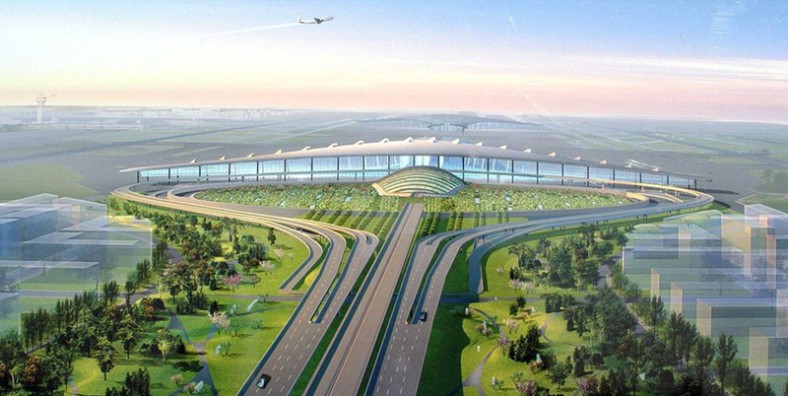 Beijing Capital International Airport (IATA: PEK, ICAO: ZBAA) is the main international airport serving Beijing. It is located 32 km (20 mi) northeast of Beijing’s city centre, in an enclave of Chaoyang District and the surroundings of that enclave in suburban Shunyi District. The airport is owned and operated by the Beijing Capital International Airport Company Limited, a state-controlled company. The airport’s IATA Airport code, PEK, is based on the city’s former romanized name, Peking.

Beijing Airport was opened on 2 March 1958. The airport then consisted of one small terminal building, which still stands to this day, apparently for the use of VIPs and charter flights. On 1 January 1980, a newer, larger Terminal 1 – green in colour – opened, with docks for 10 to 12 aircraft. The terminal was larger than the one built in the 1950s, but by the mid-1990s, its size became relatively inadequate.

In late 1999, to mark the 50th anniversary of the founding of the PRC, the airport experienced a new round of expansion as Terminal 2 opened on 1 November of that year. Terminal 1 was then temporarily closed for renovation after the opening of Terminal 2. 20 September 2004 saw the opening of a renovated Terminal 1, which at that time solely handled China Southern Airlines’ domestic and international flights from Beijing. Other airlines’ domestic and international flights still operated in Terminal 2.

Another round of expansion started in 2007. A third runway opened on 29 October 2007, to relieve congestion on the other two runways. Terminal 3 (T3) was completed in February 2008, in time for the Beijing Olympics. This colossal expansion also included a rail link to the city-center. At its opening, the new Terminal 3 was the largest man made structure in the world in terms of area covered, and a major landmark representing Beijing as the growing and developing Chinese capital. The expansion was largely funded by a 30 billion yen loan from Japan and a 500-million-euro (USD 625 million) loan from the European Investment Bank (EIB). The loan is the largest ever granted by the EIB in Asia; the agreement was signed during the eighth China-EU Summit held in September 2005.

Fresh from hosting the 2008 Summer Olympics and adding its new terminal building, Beijing Capital has overtaken Tokyo Haneda to be the busiest airport in Asia based on scheduled seat capacity.

Terminal 1, with 60,000 m2 (650,000 sq ft) of space, opened on 1 January 1980, and replaced the smaller existing terminal, which had been in operation since 1958.[13] Terminal 1 was closed for renovation from 1 November 1999 to 20 September 2004, during which all airlines operated from Terminal 2. Featuring 16 gates, it was the operational base for the domestic routes of China Southern Airlines and a few other airlines such as XiamenAir and Chongqing Airlines, and was originally planned to handle domestic traffic excluding those to Hong Kong and Macau.

With the opening of Terminal 3, the terminal was closed for light refurbishment, and its airlines were moved to Terminal 2 on 20 May 2008.[14] Terminal 1 reopened for a second time on 27 June 2008, and became the operational base for all domestic flights operated by the HNA Group including those of Hainan Airlines, Grand China Air, Beijing Capital Airlines and Tianjin Airlines, while all HNA Group’s international flights as well as those to Hong Kong, Macau and Taiwan remain in Terminal 2.

Terminal 2 opened on 1 November 1999, with a floor area of 336,000 m2 (3,620,000 sq ft).[13] This terminal was used to replace Terminal 1 while the latter was undergoing renovation, cramping all airlines despite being far bigger than Terminal 1. It can handle twenty aircraft at docks connecting directly to the terminal building. Prior to the opening of Terminal 3, all international flights (and the majority of the domestic flights) operated from this terminal. This terminal now houses China Eastern Airlines, China Southern Airlines, Hainan Airlines (all International flights including flights to Taiwan, Hong Kong, and Macau), SkyTeam(excluding China Airlines), Oneworld members -American Airlines and SriLankan Airlines, Air Koryo, and other domestic and international flights other than those operated by Air China, Shanghai Airlines, Star Alliance members and Oneworld members. A gate capable of handling the A380 (gate 21) was also built at the terminal.

Terminals 1 and 2 are linked by a public walkway that takes about 10–15 minutes to traverse. Shuttle buses connect all three terminals.

Terminal 3 was designed by a consortium of Netherlands Airport Consultants (NACO), UK Architect Foster and Partners and ARUP. Lighting was designed by UK lighting architects Speirs and Major Associates. The budget of the expansion is US$3.5 billion. Much larger in size and scale than the other two terminals, Terminal 3 was the largest airport terminal-building complex in the world to be built in a single phase, with 986,000 m2 (10,610,000 sq ft) in total floor area at its opening.[13] It features a main passenger terminal (Terminal 3C) and two satellite concourses (Terminal 3D and Terminal 3E), all of them five floors above ground and two underground, with the letters “A and B” omitted to avoid confusion with the existing Terminals 1 and 2. Only two concourses were initially opened, namely Terminal 3C dedicated for domestic flights and Terminal 3E for international flights. Terminal 3D officially opened on 18 April 2013. The newly opened concourse is temporarily used solely by Air China for some of its domestic flights.

Terminal 3 of the BCIA is currently the second-largest airport passenger terminal building in the world. Its title as the world’s largest was surrendered on 14 October 2008 to Dubai International Airport’s Terminal 3, which has 1,713,000 m2 (18,440,000 sq ft) of floor space.

On 20 July 2013, a man in a wheelchair detonated small homemade explosives in Terminal 3 of the Beijing International Airport. The bomber, reported to be Ji Zhongxing, was injured and taken to a hospital for his injuries. No other people were hurt.

Terminal 3 has a 300,000 m2 (3,200,000 sq ft) transportation centre with a 7,000-car garage. The transportation centre has designated traffic lanes for airport buses, taxis and private vehicles. Travelers bound for T3 can exit their vehicles and enter T3 within five minutes. There is also a station for the Airport Express Line of the Beijing Subway.

Terminal 3 has 243 elevators, escalators or moving walkways. Each row of seats in the waiting area has electrical outlets. Every restroom has a diaper changing station. There is also a room for travelers with disabilities.[citation needed].

One of Terminal 3’s highlights is the US$240 million luggage-transfer system. The luggage system is equipped with yellow carts, each of which has a code that matches the bar code on every piece of luggage loaded and allows easy and accurate tracking. More than 200 cameras are used to monitor activities in the luggage area.

The luggage system can handle 19,200 pieces of luggage per hour. After a luggage is checked in at any of the 292 counters in Terminal 3C, it can be transferred at a speed of ten metres per second. Hence, a luggage can travel from T3C to T3E in five minutes. Arriving passengers should be able to begin retrieving their luggage within 4.5 minutes after airplanes are unloaded.

Besides X-ray scanners, additional equipment are used to conduct baggage screening. Passengers will be able to check in their luggage at the airport from several hours to even a day before their flights. The airport will store the luggage in its luggage system and then load it on the correct aircraft.

The highest building at the airport, a 98.3 m (323 ft) monitoring tower, stands at the southern end of T3. The roof of T3 is red, the Chinese color for good luck. The terminal’s ceilings use white strips for decoration and to indicate directions. Under the white strips, the basic color of the ceiling is orange with light to dark tones indicating where a passenger is inside the building. The roof is light orange in the center. The color deepens as the roof extends to the sides in T3E and goes the other way round in T3C.

The roof of T3 has dozens of triangular windows to let in daylight. Light angles can be adjusted to ensure adequate interior lighting. Many traditional Chinese elements will be employed in the terminal’s interior decoration, including a “Menhai”, a big copper vat used to store water for fighting fires in the Forbidden City, and the carvings imitating the famous Nine-Dragon Wall.

An indoor garden is constructed in the T3E waiting area, in the style of imperial gardens such as the Summer Palace. In T3C, a tunnel landscape of an underground garden has been finished with plants on each side so that passengers can appreciate them inside the mini-train.

The T3 food-service area is called a “global kitchen,” where 72 stores provide food ranging from formal dishes to fast food, from Chinese to western, and from bakery goods to ice cream. Airport officials have promised that people who buy products at the airport will find the same prices in central Beijing.

The terminal provides 72 aerobridges or jetways and is further complemented with remote parking bays that bring the total number of gates to 150. Terminal 3 comes with an additional runway. It increases BCIA’s total capacity by 72 million passengers per year to approximately 90 million.[21]

The terminal has gates and a nearby runway that can handle the Airbus A380. This capability was proven when Singapore Airlines briefly offered A380 flights to Beijing in August 2008 during the Summer Olympics. Emirates Airline has started its scheduled daily operation to Dubai as of 1 August 2010. Lufthansa has been using these facilities since October 2010 to handle up to five A380 flights per week.

In conjunction with the construction of the new terminal, Bombardier Transportation installed a 2 km (1.2 mi) automated people mover which connects T3C and T3E via T3D in a 2–5 minute one-way trip. The line uses Innovia APM 100 vehicles running at 6-minute intervals at a maximum speed of 55 kilometres per hour (34 mph).

The airport provides a free inter-terminal shuttle bus between Terminals 1/2 and 3. They operate every 10 minutes from 6 am to 11 pm, and every 30 minutes from 11 pm till 6 am. Terminals 1 and 2 are connected by a lengthy corridor.

The airport is accessible by four express tollways. Two of these run directly from northeastern Beijing to the airport. The other two connect to the airport from nearby highways.